On Wednesday the volcanology lab groups here at UB had a discussion about basaltic eruptions, particularly at Paricutin and Jorullo volcanoes in Mexico. The first thing I was reminded of on hearing the name Paricutin was not a geological fact, but a childhood memory – one of watching Reading Rainbow, actually.

Reading Rainbow, if you aren’t familiar with it, was one of the best children’s shows out there. Sadly, it ended in 2006, but in its 23 year run, host Levar Burton and any number of celebrity narrators did wonders to keep kids reading and show them that books were not only worth their time, but fun and exciting to boot. Each episode was divided between book reviews and readings – sometimes by well-known celebrities like Julia Child and James Earl Jones, to name a couple – and Levar Burton visiting people and places related to the theme of the episode. It was one show that my parents were happy to let me watch any time it was on, and they’d usually try and find the books for me to read afterward. It’s sad that it’s no longer going, but hopefully reruns will still pop up on public television stations.

In fact, a few of those early episodes – reruns for me, since I wasn’t around to watch their first runs – were responsible for starting me on a geologic path. I particularly remember one episode called Hill of Fire, in which the featured book talked about a volcano that suddenly appeared in a Mexican cornfield – Paricutin, of course. I thought this was totally fascinating, and probably asked my parents if we could have a volcano in our backyard, or something like that. And now that I’m in graduate school, I can look back on what I remember of that show and use it as a basic context for understanding the professional papers I’m reading. How cool is that? 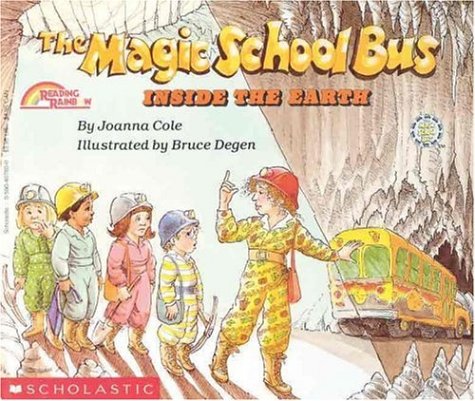 Another episode talked about one of my favorite childrens’ book series: The Magic Schoolbus. Who doesn’t love Ms. Frizzle and her crazy bus? Of course, the book was The Magic School Bus Inside the Earth, which I’m sure I made my mother go out and buy for me right afterward. These books were a great introduction to science topics, because they gave you the facts as a part of a narrative. Sneaky! Plus it’s always fun to see what clothing Ms. Frizzle is going to wear next. Personally, I want some of those jumpsuits for when I do fieldwork.

Not to mention Three Days On a River In a Red Canoe. It’s not about geology, but it was my first intro to camping. I didn’t do any serious camping until I was in college, but this episode definitely had me out in the backyard for a few nights that summer. I have yet to take a canoe trip, however…perhaps a goal for this summer?


Obviously, these aren’t the only geology/outdoors-related children’s books out there, but they are a few of my favorites – and I remember them after fifteen years or so because of Reading Rainbow.