This is actually an older post I’ve been sitting on, but I wanted to get something posted this week, even if it’s not about current events.

I love watching Disney movies, but occasionally the scientist gets in the way of the nostalgic enjoyment. I was reminded of this when “The Virginia Company” came up on my music player’s shuffle list. Pocahontas, which came out in 1995, is set in an area that I’m now very familiar with (the Historic Triangle, home of Yorktown, Williamsburg and Jamestown). It’s also on the Coastal Plain, which William & Mary’s Geology Department is very favorably situated to study. In fact, unless you drive west for an hour or so, all you see in that part of Virginia is Coastal Plain. Aside from the cool fossils and some of the sedimentary features (and a big honking impact crater, although you can’t see it) the Coastal Plain has relatively little to interest a volcano nut – I had to go out to Richmond to see any hard rock aside from river cobbles. That doesn’t mean I didn’t pay attention to the Coastal Plain geology. I did – and that’s why seeing the beautiful landscapes that show up during John Smith’s bold adventuresomeness in the “Mine, Mine, Mine” sequence irritates me enough that I want to smack the animators. 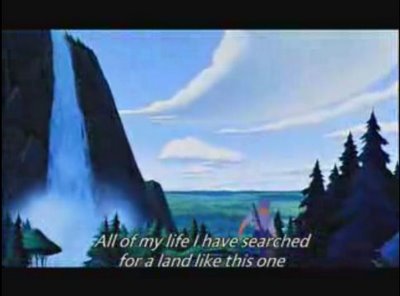 Where the hell did that mountain come from? (For that matter, why is it magically spouting a waterfall?) Did any of those animators actually go to Jamestown? Or look at a photo? Or a map? Jamestown is pretty much in a swamp, which was a really poor choice to begin with (one might assume that the colonists weren’t thinking about the scenic needs of future moviemakers when they landed there). There are no mountains, no waterfalls, and NO CLIFFS there… …unless you count the crumbly sandy ones along the rivers. See? Not impressive*. What is impressive is that John Smith apparently had the ability to teleport himself to the Piedmont in the course of the musical number, because you ain’t getting those rolling hills in Eastern Virginia. And the scene where Pocahontas jumps over a waterfall from a tall rocky cliff means that she managed to teleport all the way out to the Blue Ridge, because you don’t get waterfalls without bedrock, and the Coastal Plain doesn’t have it.

The one thing that the movie does get right about the geology is that you’d have a hard time finding any gold on the Coastal Plain. In other parts of Virginia, certainly, but on the Coastal Plain, you sometimes have trouble just finding dirt, much less gold. (There is a LOT of sand out there, however.)

I’ll ignore all the film’s other inconsistencies here – screwing up all the Native American names, and the whole John Smith/Pocahontas thing, which didn’t really happen – since other people have ripped into them much more eloquently than I could. Let’s just say that while the Disney crew might have had good intentions, they managed to both insult Virginia’s current Native Americans and perpetuated a beloved but totally inaccurate American myth. AND annoy the geologists.

I’m not saying that the more historically accurate movies are much better, mind you. The New World, which actually was filmed near Jamestown (the movie people hung out in Williamsburg when they weren’t filming, which the W&M; crowd thought was pretty cool), is a mind-numbing artsy-fartsy epic that drags on until you find yourself wanting to join the colonists who are croaking from malnutrition. It does get the utter stupidity of trying to found a colony on swampland that the natives obviously aren’t even bothering with, as well as the oppressive heat and humidity and clouds of biting insects right, but in this case accuracy doesn’t make for entertaining cinema. (And those actors really were out in an Eastern Virginia summer, which makes me feel really sorry for the ones who had to wear wool. I spent one summer in Williamsburg and immediately vowed never to do so again, because I like to breathe air rather than soup.)

In the end, I do realize that Pocahontas is a cartoon, and Disney, and geologic accuracy was not a major concern of the movie. But I do feel like the animators cut some corners and went for flashy rather than putting in the effort to reproduce what the Jamestown colonists might really have seen when they arrived in what would eventually become Virginia. For a movie that was otherwise beautifully animated, that was a real disappointment.

And I cannot forgive the cliffs. 🙂

*In fact, we reduced what little impressiveness they have by initiating multiple mass wasting events just by digging.