National Geographic has posted an interesting web article about invasive plants edging out native species in Hawaii. Scientists from the Carnegie Airborne Observatory (Stanford and Hilo) have used imaging spectroscopy and LiDAR to map 850 square miles of rainforest on Hawaii’s Big Island in order to understand how nonnative plants are affecting the current populations of native species (mainly ‘ohia, a Hawaiian tree with bright red flowers called lehua). 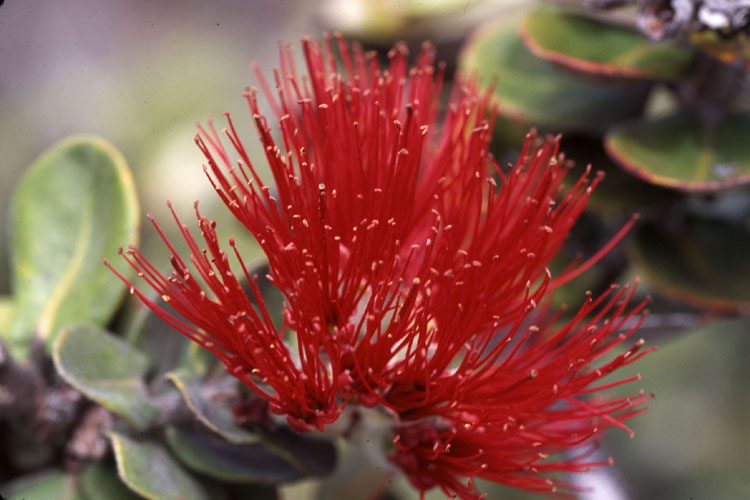 The spectroscopy and LiDAR revealed that invasive tree species, such as tropical ash and firetree, are thinning out the ‘ohia trees by “shading” them out (or taking up the space that the ohia trees would be using to get sunlight), as well as using up water and nutrients. This is a major problem in the Hawaiian islands; almost all of their native plants are under threat of being pushed out by invasive species, and it’s almost more common to see things like ironwood, banyans and ginger than it is to see ‘ohia trees or ‘ohelo bushes. Invasive plants are most often brought in for ornamental purposes and end up spreading quickly and irreversibly in Hawaii’s lush climate. Some native plants (such as the silversword) are so rare that they only grow on certain islands and at specific altitudes, and can actually be numbered – and the numbers aren’t very high.

Plants aren’t the only invasive species; wild pigs are notorious for destroying pretty much whatever gets in their way, wild goats strip bark from trees, rats eat bird eggs and carry disease, and feral cats prey on native birds and bats. One of the more ironic stories concerns mongoose; the Indian mongoose was introduced to the Islands in 1883 to deal with the rats, but instead became pests themselves without having much effect on the rat population (seeing as the mongoose is mostly diurnal and rats are nocturnal). And the cats didn’t make a dent in either. (This does mean that there are scads of adorable, flea-infested kittens roaming most tourist sites, however.)

Interestingly enough, some of the few places that seem to have trouble with invasive species are relatively young lava flows. Because native Hawaiian species had thousands of years to adapt to the harsh conditions of fresh flows, they can get a foothold faster and more easily than nonnative species. One of the notable things about hiking on the flows, especially on Kilauea, is that ‘ohia trees and ‘ohelo bushes are often the only thing you will see growing (with maybe a few small ferns here and there). It’s a small victory for the native plants, but an important one – and all thanks to the volcanoes. (See, I managed to work that in there.)