One of the most important sites of Buddhist worship is the Tawang Monastery in Himachal Pradesh in northern India. This site, which is home to an estimated 450 lamas and houses many ancient scriptures and other manuscripts. It was founded in 1681, and consists of a collection of many and large small buildings, as shown below (image from here): The extraordinary hilltop location of the site is shown in the Google Earth satellite image below – take a look on Google Earth at 27.59N, 91.86E.  The site is located at an elevation of about 3,300 metres.  The monastery is located on a site that is quite asymmetric, with a steep front side (eastern) slope and an even steeper, densely forested backslope to the west behind the monastery: 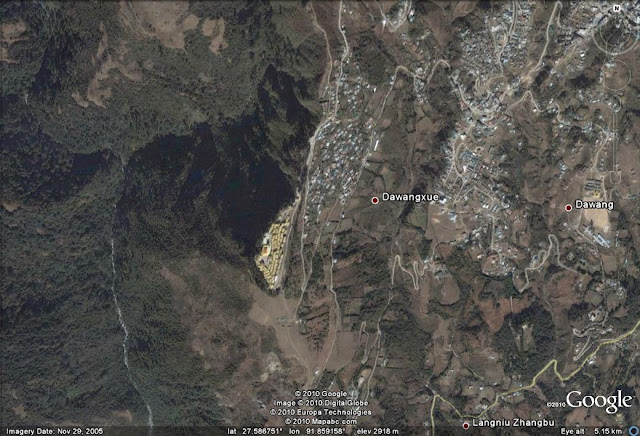 It appears to be an incredible location that even I, as an avowed atheist, would love to visit. Unfortunately, news reports have started to emerge that this site is severely threatened by landslides.  For example, the Times of India reported yesterday:

“The Tawang monastery in Arunachal Pradesh, where the spiritual leader stayed in 1959 during his flight from Tibet, has been witnessing massive landslides around it since Monday.  The 330-year-old monastery, also known as Gaden Namgyal Lhatse, stands on the spur of a hill about 10,000 feet above sea level. Landslides have already damaged the plantation and electric posts around it.”

Unfortunately it is hard to know just how bad this problem might be, although the reports suggest that a plan is being formulated.  The cause of the landslides will be an interesting aspect to investigate, given that this is the dry season, well after the monsoon.  However, a quick look at the Google Earth imagery in perspective view is not encouraging.  In particular, the northern flank of the site appears to consist of a landslide scarp (the area mostly in shadow): 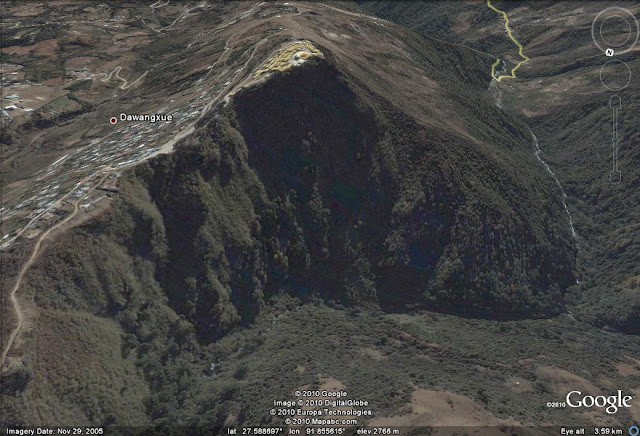 The reasons for this are clear – the river, which flows towards the south, is eroding the toe of the slope due to the site being on the outside of the bend.  In the long term erosion at the toe will need to be prevented if the site is to be preserved.  The proximity of the buildings to the crest of this slope is clear: Even if the landslide activity at this site reduces before major damage is done, I would think that there needs to be a fairly urgent landslide management plan for this site if it is to be preserved.  Unfortunately, this will not be a cheap or easy exercise.