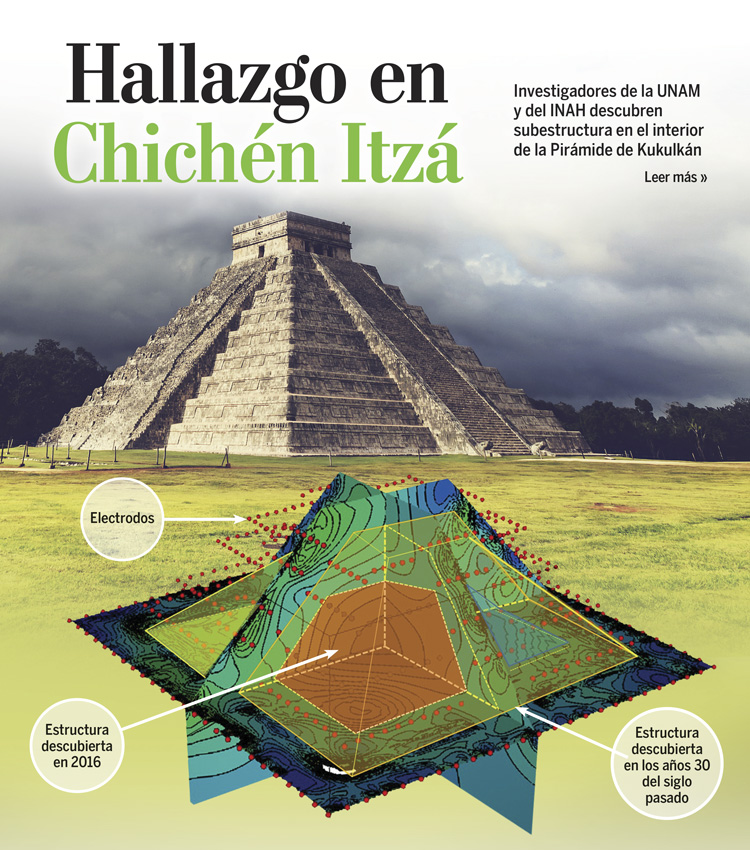 Scientists in Mexico have found evidence for a third and earlier—more purely Mayan—pyramid inside of the famous and iconic Pyramid of El Castillo at Chichén Itzá, in Yucatán.

Using a non-destructive technique that employed hundred of electrodes deployed on the surface of the pyramid, the researchers also confirmed previous discoveries of a second pyramid, as well as their own 2014 discovery of a partially water-filled sinkhole beneath the pyramid.

“The results indicate the existence of two pyramids inside the main Mayan building,” said René Chávez, a geophysicist at the National Autonomous University of Mexico (UNAM) and coordinator of the investigation. “One was already discovered during the 1930’s by Mexican archaeologists. However, the second substructure was just a hypothesis in some archaeologists’ minds.”

René Chávez and his colleague Andrés Tejero will be presenting a poster about their discovery on Wednesday, December 14, at the AGU Fall Meeting of the American Geophysical Union in San Francisco.

The technique they used is called Electrical Resistivity Tomography (ERT) which does not disturb the archaeological site. ERT works by injecting direct current (DC) into the ground or, in this case, the pyramid, with two electrodes into the ground and observing the different electrical potential difference with two other electrodes.

The UNAM team used ERT to spy into the pyramid terrace-by-terrace, deploying more than 800 flat electrodes at a time on each terrace. They were able to then acquired more than 45,000 observations that gave them an unprecedented amount of data on the interior of Pyramid El Castillo.

“A lot of controversy has arisen in regards to the occupational chronology of Chichén Itzá,” said Denisse Argote, an archeaologist and geophysicist with Mexico’s National Institute of Anthropology and History (INAH), who is involved in the investigation. The study of the architectural styles, ceramic types and some absolute dating using thermoluminiscence, have three main periods that are now generally accepted: Late Classic (500-800 AD), Early Post Classic (800-1100 AD) and Late Post Classic (1100-1300 AD),  Argote explained.

The last construction of El Castillo pyramid was built around 950-1000 AD, built with the so-called Mexican style because it combined Mayan with Central Mexico elements. The first substructure, discovered in the 1930s, was a transitional phase with mostly Mayan elements but with the introduction of Central Mexico influences.

“We believe (the second pyramid discovered in the 1930s) was built around 850-900 AD, but the dates are not fully proved,” said Argote. “Now the second substructure, more ancient that the ones known, would be of a pure Mayan style.” Following the chronology established for Chichen, this pyramid could have been constructed between 600-800 AD. “The study of this substructure could tell us a lot about the beginning of the settlement in the site and its cultural influences.”