Scientists search the seas for soot 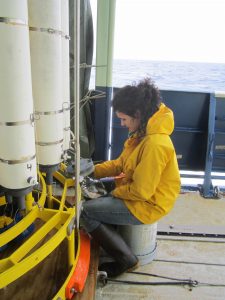 Alysha Coppola, who received her PhD from UCI in 2015 and is now a postdoctoral researcher of soil science and biogeochemistry at the University of Zurich, on the deck of the National Oceanographic and Atmospheric Administration research vessel Ronald Brown collecting seawater samples in search of black carbon in the North Atlantic Ocean. Samples were obtained from various depths down to 2,200 meters. Sample bottles were then frozen in the ship’s laboratory and transported back to UCI for further black carbon radiocarbon analysis.
Credit: Samuel Billheimer

Earth system scientists from the University of California, Irvine have taken water samples from the north Pacific, north and south Atlantic, and Arctic oceans in search of repositories of black carbon, soot from burning biomass and diesel engines, among other sources. They’ve found considerably less of the material than expected, and they’ve discovered that it exists in at least two varieties, a younger pool closer to the ocean’s surface that is absorbed into the environment in a roughly 100-year cycle and an ancient reserve that remains stable for millennia.

“We find that, indeed, black carbon resides in the oceans for tens of thousands of years, yet it’s not as abundant as you’d expect given its relatively inert structure and the sheer quantity of it being produced on land,” said Alysha Coppola, a postdoctoral researcher of soil science and biogeochemistry at the University of Zurich and lead author on a study published in Geophysical Research Letters, a journal of the American Geophysical Union. “It seems that all of the black carbon emitted into the environment every year may not persist as a ‘locked’ chemical structure in the carbon cycle; some of it likely gets degraded back to carbon dioxide by other loss processes.”

Ellen Druffel, UCI professor of Earth system science and senior author on the study added, “As we’re changing the planet, burning more material and producing more black carbon, we need to understand where it is going; we just don’t, and that’s a huge red flag. Given what we know about how much black carbon is generated and our understanding of the rates at which we think it breaks down, we should be knee-deep in this stuff. There apparently are some big sink mechanisms that we don’t yet understand.”

Climate scientists expect even more of this material to be ejected into the environment as the planet heats up and forest fires become more prevalent. Up to 27 percent of it is retained as char or soot instead of returning to the atmosphere as carbon dioxide, researchers said. Black carbon is a particularly strong agent of climate change, itself, as it absorbs sunlight, trapping heat on Earth. Particles thrown into the atmosphere through fossil fuel or biomass burning can land on ice and snow in the Arctic, reducing reflectivity.

Coppola said black carbon is produced from incomplete combustion of fuels and moves through the carbon cycle at a much slower pace than unburnt carbon. A tree grows then dies on a roughly 100-year timescale. But after a forest fire, some of the carbon from trees is converted into a more complicated and resilient structure that is harder for microbes to break down.

“Black carbon is like rubber tires that don’t degrade quickly in the environment,” Coppola said. “It probably gets broken down by sunlight or microbes, but these processes can take up to a millennia. We also don’t know and understand completely how this relatively stable structure degrades. What likely happens is that the molecules move around through deep ocean circulation, and are then broken apart by sunlight when deep Antarctic waters upwell in the Southern Ocean.”

Coppola, who received her PhD from UCI in 2015, said the surface of the ocean has more black carbon than the deep ocean because of river input and atmospheric deposition. “River transport is important because it’s the source of recent black carbon to the oceans, mixed into the ancient pool that’s persisted for tens of thousands of years.”

She said the material in the deep ocean is as old as 23,000 years, suggesting that the variety delivered by rivers is not lingering in the sea.

“It may be that the stuff is being chomped down or degraded by a photo processes, where the sun penetrates several meters of the upper ocean, providing for the oxidation of black carbon,” said Druffel. “Or maybe there’s some place it hides. I don’t think that’s the case, though. I think it’s more a sink, a mechanism for its destruction that we don’t understand.”

The research was funded by the National Science Foundation’s Chemical Oceanography Program and Arctic Research Opportunities.