Artist’s impression of the enormous collision that formed the Moon
Credit: NASA via Wikimedia Commons

Around 4.5 billion years ago, shortly after the solar system was formed, an object roughly the size of Mars smashed into Earth. The energy of this impact sheared off enough material to create the Moon and melt the young Earth’s mantle into a giant ocean of magma roughly 1,000 kilometers (approximately 621 miles) deep. This magma ocean set the stage for the evolution of the Earth’s rocky mantle and could have created Earth’s early magnetic field which shielded the planet from the solar wind and facilitated the evolution of life on Earth.

Now, a new study proposes that Earth’s rotation – previously assumed to be unimportant in the evolution of the magma ocean – could have influenced how the hot liquid rock solidified. The new study makes the case that Earth’s rotation is an important variable to be considered when trying to answer questions about Earth’s history, such as how the mantle formed, how layers with different chemical properties developed, and how plate tectonics evolved, according to Christian Maas, a PhD student at the Institute for Geophysics at the University of Münster, Germany, and lead author of the new paper published earlier this month in the Journal of Geophysical Research: Solid Earth, a publication of the American Geophysical Union.

This young Earth was spinning much faster than today: a day was only two to five hours long, depending on its proximity to the newly formed Moon. The new study models this rapid rotation at the poles and at the equator. The study’s authors found that rotation created differences in where silicates – a primary component of magma – crystallized. Silicate crystallization is an important step in the magma ocean’s solidification and the formation of Earth’s mantle. 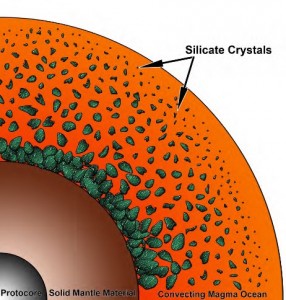 A previous model of the early Earth’s magma ocean, at an early stage of magma ocean crystallization and after the beginning of core formation. Silicate crystals (green) form in the magma and fall through the vigorously convecting ocean. During their fall they grow in size and accumulate at the bottom.
Credit: Christian Maas, et al. Taking rotation into account presents this alternative scenario for the early stages of the magma ocean crystallization. At the poles the silicate crystals settle at the bottom, whereas at the equator they accumulate at mid-depth.
Credit: Christian Maas, et al.

Excluding the Earth’s rotation, models show that heavier silicate crystals fell deeper into the ocean while lighter crystals settled atop the heavier crystals. The new study suggests the Earth’s rotation would cause this process to be different at the equator versus at the poles. All crystals would still settle to the bottom of the ocean at the poles. But due to the planet’s fast rotation, the rotational force on the silicates at the equator would cause the heavier silicate crystals to accumulate at mid-depths, while the lighter crystals would settle to the bottom of the ocean.

This asymmetric accumulation of crystals at the equator and poles could have influenced the chemical and mechanical processes in the magma that led to the formation of modern Earth, according to Maas.