A view of the beach near the Kalander Hut.

A couple of weeks ago, I went on a backpacking trip with my husband Jackie and five of our friends. We drove from our home in Cape Town, South Africa about seven hours down the coast to the Garden Route National Park. We went to hike the Tsitsikamma Trail, a 6 day, 60 km long trail that winds its way through the beautiful Tsitsikamma Mountains, which contain areas of indigenous afromontane forest and mountain fynbos. Fynbos is a type (a floral kingdom, in fact!) of shrubland or heathland vegetation that is found only in the southwestern part of South Africa. Fynbos is known for its high biodiversity and for its large numbers of endemic plants– that is, plants that are found nowhere else in the world. The Tsitsikamma Trail also meanders past a beautiful beach on the Indian Ocean, amongst impressive exposures of Table Mountain sandstones, and across many beautiful rivers and streams, which are either clear or a rusty red color. The word Tsitsikamma comes from the Khoekhoe language and means “clear water” or, possibly, “place of much water” or “waters begin”.

Jackie, our friends, and I started hiking the Tsitsikamma Trail on Thursday, September 19th and completed the first four days of the hike, finishing on Sunday, September 22nd. We didn’t fail to complete the entire hike– we actually planned to do just four days of the hike. We decided to do just four days primarily because our vacation time was limited. I guess we were also a little worried about our fitness level! The hike was physically challenging, but all seven of us managed to keep up a fairly good pace, even while carrying heavy backpacks! After the hike, I was quite sore for a couple of days. However, the soreness was well worth it. The Tsitsikamma Mountains are full of magical places, and it was wonderful to spend four days re-connecting with the natural world, my smartphone turned off and my emails ignored.

The trail is very well maintained and organized. Along the trail, there are five huts where hikers can stay overnight. The huts are very nice with a sleeping area, a lapa (a covered cooking / fireplace area), flush toilets, running water, and showers. There is no electricity, but kettles can be used to heat water for hot showers. The huts (with the exception of Kalander Hut, which has limited service because the road to the hut recently washed away) are stocked with firewood and other supplies. The cost for using the huts is R70 (a little less than US $10) per person per night.  The huts are regularly checked on and maintained by forest rangers, who also keep an eye on all the hiking groups. Many hikers carry their own gear (food, extra clothes, water, sleeping bags, etc.) in large backpacks. That’s the option that our group chose. However, hikers who want a more leisurely hiking experience can pay to have their gear portaged between huts and can just hike with day packs. Hikers don’t have to pack in too much (heavy!) water since there is plenty of fresh water along the trail. The huts all have running water, and there are many streams along the trail. It is safe to drink the water at most huts and from most streams. As a precaution, I did treat my water with sterilization tablets. However, many of my South African friends drank the water directly and suffered no ill effects. In any case, you only need to carry enough water for a day or part of a day.

Over four posts, I would like to share some pictures and information from our Tsitsikamma Trail hike. I will devote one post to every day of the hike.

Here is the hiking schedule we followed:

Day #1: Leave Cape Town early and drive 7 hours to the start of the hike in Nature’s Valley. Shuttle one car to the Lottering Plantation. Hike 3.6 km from Nature’s Valley to Kalander Hut.

Day #2: Hike approximately 17 km (note that the map below is outdated and that the trail has been re-routed and is now significantly longer) from Kalander Hut to Blaauwkrans (or Bloukrantz) Hut.

Day #4: Hike 11.5 km along the “escape route” from Keurbos Hut to Lottering Plantation. Drive 7 hours back to Cape Town.

After four days of hiking and driving, we were fairly exhausted for work on Monday morning. Fortunately, the Tuesday was a public holiday (Heritage Day) in South Africa, so we only had to work one day before we had a day to rest.

Here are some maps showing the location of the Tsitsikamma Trail: Google map showing the approximate location of the Garden Route National Park (B) relative to Cape Town (A). Click to enlarge.

A map of the Tsitsikamma Trail.Click to enlarge.

Today, I’ll be sharing some pictures from the first day of our hike. The first day was a short hike to the Kalander Hut, which is located close to the beach. When we arrived at the hut, it was nearly dark. So, we visited the beach very quickly then prepared dinner. We visited the beach again early the next morning before we started on our long hike to Blaauwkrans Hut. Jackie and I at the start of the hike. Jackie carried in firewood and beer for the first night. Fortunately, we only had to hike 3.6 km the first day! There is a jeep track leading to Kalander Hut, but it has collapsed / washed out at this river. However, hikers can still make it through to the hut! We took off our shoes and waded through the water, which was nearly to my knees at its deepest. Jackie in front of Kalander Hut. The beach near the Kalander Hut. The trench was dug (by park rangers with a backhoe) the night before to alleviate inland flooding. By morning, there was a swift river running through the trench! 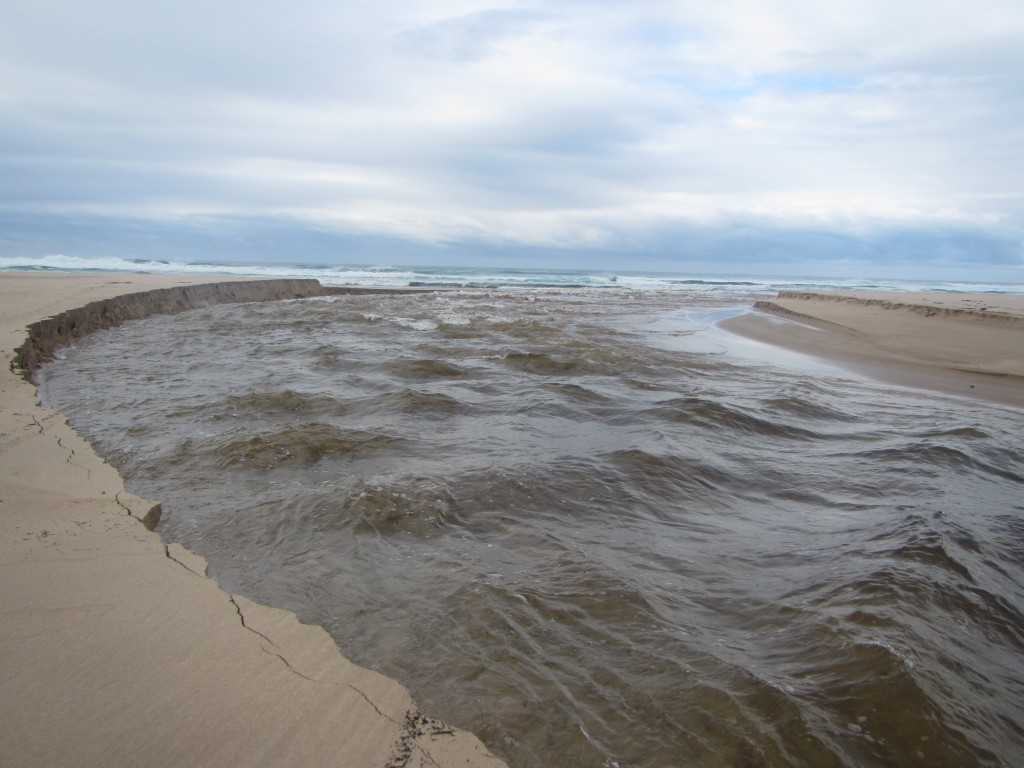 Swiftly flowing waters in the trench. Cliff near the beach. Informational signs on the beach, perched far above high tide and rouge waves. A close-up of some beach rocks. 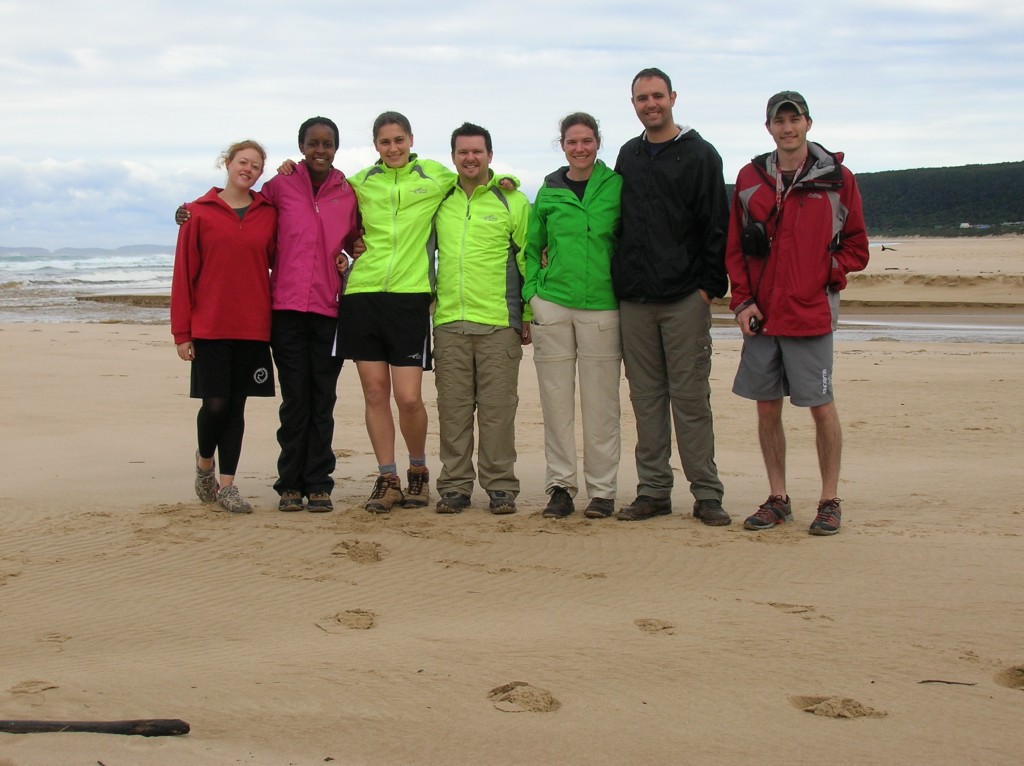 The hiking group on the beach, wearing various shades of rain gear.

Stay tuned for Day #2 on the Tsitsikamma Trail!