Geology Word of the Week: Z is for Zeolite def. zeolite:
The name of a large group of porous, framework, aluminosilicate (their basic structure is interlocking tetrahedra of SiO4 and AlO4) minerals that contain significant water and also significant exchangeable cations, which makes them absorbent materials. The name zeolite originates from the Greek words “zeo”, which means “to boil”, and “lithos”, which means “stone”. Zeolites were given their name because when you heat them, they generally release water in the form of steam. There are dozens of minerals in the zeolite group. You can view a list of zeolite minerals here. Zeolites often form through the interaction of volcanic rocks and ash with alkaline groundwater. Thus, you can often find spectacular and very beautiful zeolite crystals inside vesicles and vugs (often creating amygdules or crystal-filled cavities) in volcanic rocks such as basalt. Zeolites also crystallize in shallow marine basins.

My good friend and fellow geoblogger Dana Hunter has provided me with zeolite pictures galore. She took these pictures during one of her geology trips with Lockwood DeWitt. Thanks for the pictures, Dana and Lockwood! 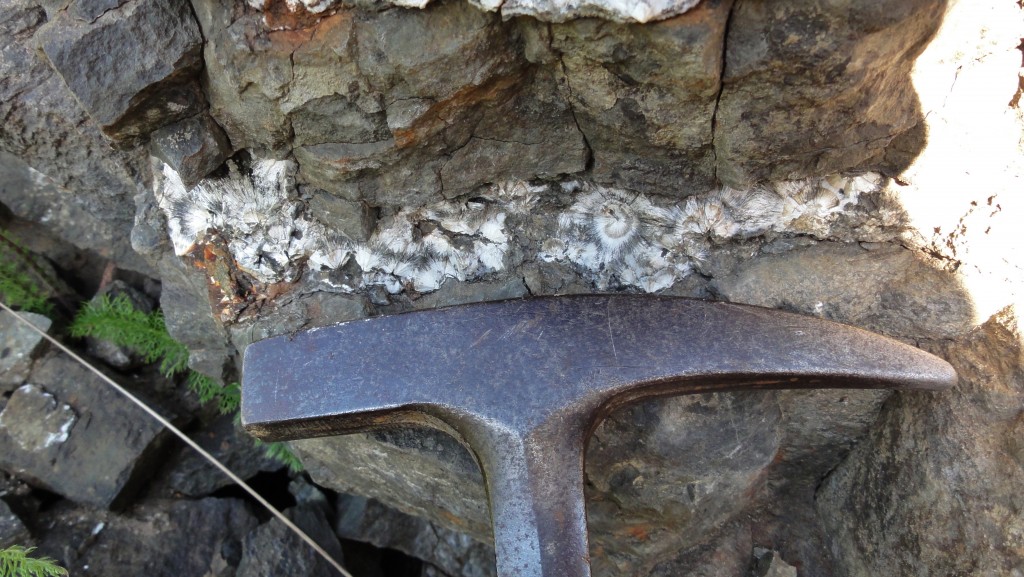 A zeolite amygdule (Lockwoods says consisting of mostly of the zeolite mineral stilbite) in a rock from Quartzville, Oregon. Picture courtesy of Dana Hunter. A closer view of the zeolite amygdule. Picture courtesy of Dana Hunter. ***Thanks to several of my twitter followers for suggesting this week’s word and to Dana and Lockwood for all the pictures!***

Posted in: Geology Word of the Week, mineral, zeolite No Comments/Trackbacks »