Geology Word of the Week: V is for Vitreous Introductory Note: At long last, the Geology Word of the Week has returned! For almost a year, the Geology Word of the Week post has been on hold. I briefly resurrected the weekly word back in April with the posts T is for Time and U is for Ulexite, but the revival was short-lived. I neglected the weekly word because this past year has been busy and full of important life events and changes: getting married, finishing up my PhD, moving overseas, and starting my first job, among other things! To keep Georneys interesting, I started the Monday Geology Picture weekly feature. I’ll still keep posting the Monday Geology Picture, but I also hope to resume my weekly words. As always, feel free to suggest words and provide information and pictures related to the weekly word. Note that I go through the alphabet in order for my words, so for next week you should suggest words that start with “W”. From now on, I’ll do my best to keep up with the weekly word, but I may skip a week or several weeks here and there depending on what else is going on in my life.

def. Vitreous:
Resembling glass. Most often used in geology to refer to a glassy (highly reflective and often transparent to translucent) luster.

Luster (or Lustre) is a term that is used to describe the way that light interacts with the surface of a mineral, rock, or other solid (such as glass or a manmade crystal). Luster is one of many physical properties (others are hardness, streak, cleavage, crystal shape, color, etc.) that geologists use to help them identify rocks and minerals. There are several terms used to describe luster, such as dull, metallic, waxy, pearly, and so on. Andrew Alden, the geology writer for About.com, has a great webpage (including an example gallery) all about luster here. Vitreous (also called glassy) luster is which resembles the luster of glass. Vitreous rocks and minerals are thus highly reflective and often translucent to transparent, like glass. Some vitreous rocks, such as obsidian, even are glass… natural glass!

Here’s a few more pictures of rocks and minerals with vitreous luster: 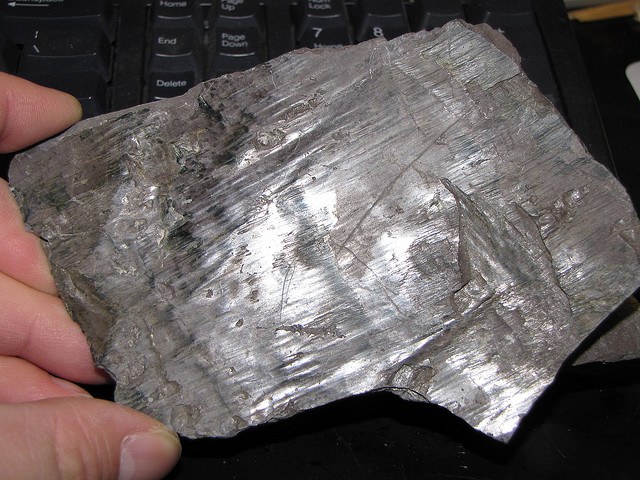 Limestone covered by vitreous sandstone, which has been melted by lightning. Cool, huh?! Photo courtesy of David Bressan. Quartz and tourmaline, both of which have vitreous luster. Photo courtesy of Patrick Donohue.

Posted in: Geology Word of the Week, luster, obsidian, vitreous No Comments/Trackbacks »