I haven’t posted a mystery rock in awhile, and I have some catching up to do!

A little over a month ago I received an email from Liz, who is a Middle School teacher in the Boston area.

Once you have a moment and are not too busy with post-wedding stuff, could you take a look at the rock pics I have attached? The 8th grader I work with wants to know where the two parallel white lines came from. Any theories? I would really appreciate it!!

And she sent me the two following pictures: 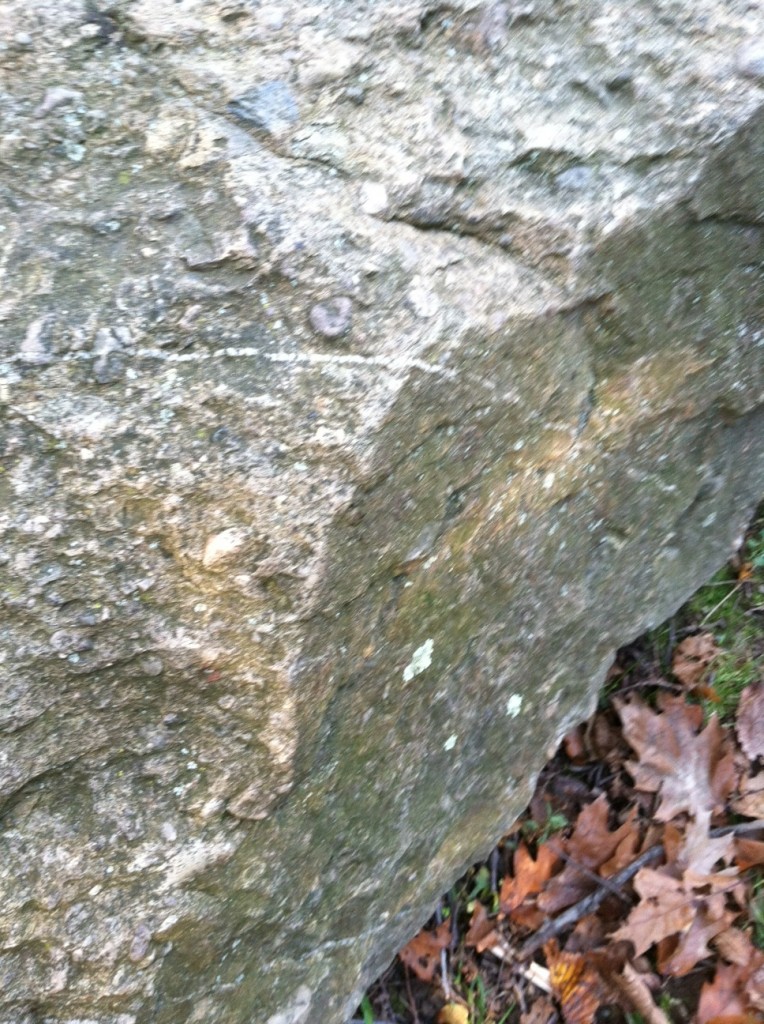 There’s no scale in the above pictures, but Liz indicated to me by email that the rock is approximately 3 feet across.

First of all, great question Liz (and Liz’s student). However, before I talk about the white lines in the rock and how I think they formed, let me first talk a little bit about the rock itself. My first task is to identify the rock.

Let me work through my basic identification questions:

Is the rock natural or manmade?

Since I can’t see the field context and the rock doesn’t seem to be in situ (i.e. attached to bedrock), there’s a slim chance that this rock is manmade concrete rather than  a natural rock, but the morphology and weathering of the rock as well as the presence of the white lines (I’ll explain more in a minute) suggests to me that this is a natural rock. Liz also mentioned to me that there are similar rocks nearby, so perhaps there’s an outcrop in the vicinity.

Is the rock igneous, sedimentary, or metamorphic?

The rock is composed of pieces of other rocks which have been cemented together, so the rock is sedimentary.

So, what is the rock?

The rock appears to be a coarse, poorly-sorted conglomerate. A conglomerate is a type of sedimentary rock that consists of rounded clasts (rock fragments) which have been cemented together.  The clasts are generally rounded from transport in water, such as in a stream. The cement composition varies, but is often composed of calcium carbonate or silica-rich material. I’m not sure about the matrix composition for this rock– Liz tried (and failed) to break off a piece of the rock, so it might be a harder silica-rich matrix.  However, I know from my work with travertines that calcium carbonates can also be quite hard and difficult to break. A simple way to identify the matrix material is to pour some dilute acid on the rock– if the rock fizzes, the matrix is calcium carbonate. This conglomerate is coarse because it contains fairly large clasts (based on the rock size of ~3 feet). This conglomerate is poorly-sorted because the clasts are of different sizes. That is, some of the clasts are very large and some are very small. Coarse, poorly-sorted conglomerates tend to form in high-energy environments, such as a turbulent streambed. Because of the weathering of the conglomerate, I can’t tell the composition of the clasts– they are likely of variable composition.

Now that I’ve identified the rock, let me move on to the two parallel white lines. Those two white lines are called veins. A vein is a secondary, sheetlike mineral deposit that forms within a pre-existing rock.  Those two veins are actually pretty neat! Let me answer some questions about them:

How did the two white veins form?

The two white veins formed when fluids permeated the conglomerate and a secondary mineral was precipitated (fell out of solution). The veins either formed along a pre-existing fracture in the rock or formed when the veins created their own fracture path as the fluids moved along a preferred fluid flowpath.

When did the two white veins form?

Since they cross through the cobbles of the conglomerate (especially the uppermost vein), the two white veins must have formed after the conglomerate was cemented together. Veins actually always form after the primary rock. However, multiple generations of veins can cross-cut each other. Veins are a very useful tool for geologists trying to understand cross-cutting relations— something that helps geologist determine the order in which a sequence of geological deposits were emplaced.

What are the two white veins made of?

My guess is that the veins consist of quartz, but they could also possibly be calcite.

Why are the two white veins parallel to each other?

I hope the above answers a few questions about the mystery rock. If you have any ideas about this rock, please feel free to add some comments below.  Also, if you want to see my previous mystery rock posts, you can find them here.