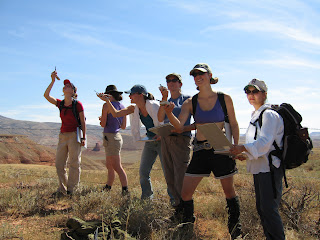 A group of geology students learning how to “use” Brunton compasses, Western USA, Fall 2005.

Introductory geology courses have the unfortunate (or fortunate, perhaps?) reputation for being “easy” or “fun” relative to other introductory science courses such as chemistry, physics, and biology. At most colleges, the introductory geology course (Geology 101 or Introduction to Earth Science) is known as “Rocks for Jocks.” The stereotype is that jocks (e.g. guys on the football team) take introductory geology as an easy way to obtain a necessary science credit. At colleges here in the United States, even if you are not a science major you generally have to take at least one science class. At least, this is the case at liberal arts schools where students mostly take courses in their major, but also are required to fulfill broad educational requirements and take a course in subjects such as English, History, Art, Language, and-of course- Math and Science.

I have mixed feelings about the “Rocks for Jocks” stereotype. I love the name, actually. As I mentioned in my welcome post, geologists have a penchant for puns and jokes and fun names. I’ve even heard other geology courses described in similar manners. For instance, I have heard Introduction to Geophysics called “Quakes for Flakes.” However, I do feel a little sad that geology is considered an “easy” science. There is no doubt that “Rocks for Jocks” is an easier class to take for your science credit than Chemistry 101, Physics 101, or Biology 101. I can verify this firsthand as someone who took Chemistry 101, Physics 101, Rocks for Jocks, and an introductory biology course.

As a quick aside, I actually didn’t take Biology 101- I took a different introductory biology course about dinosaurs because who wouldn’t want to take a class about dinosaurs??? It turned out the class was mostly about cladograms and evolution. On the first day of class, the professor said something along the lines of, “Welcome to the dinosaur class. This class is really about ancestral relations and evolution. I could just as easily teach what I need to teach you using clams or cows or squids. However, none of you would probably take a class about clams, so I’m going to use dinosaurs in all my examples.” The class turned out to be a little more difficult than I expected, but I enjoyed it anyway.

Here at MIT where I am a graduate student, geology is almost considered a humanities department (not really, but some engineers view it that way). The geology major is often considered “an easy major choice” for students who can’t quite cut it (at MIT, anyway) in physics or engineering. Sometimes, I even catch myself saying, “Oh, I’m at MIT… but I’m only in the EAPS (Earth and Planetary Science) department.”

However, I don’t really think that geology is an “easy” science. At least, not when you continue beyond “Rocks for Jocks” and pursue the full undergraduate major. My second, third, and fourth year geology classes were challenging. The geology department was small (relative to chemistry, physics, and biology), so perhaps my courses were slightly easier because the professors were able to give their students more attention. However, I remember some very tough mineralogy, petrology, and geochemistry exams. Also, because geology is a highly interdisciplinary field, in order to be prepared for graduate school I actually took several chemistry, physics, biology, and math courses as an undergrad. So I had to study those “tough” sciences in order to be prepared for my “easy” science of geology.

Come to think of it, the “Rocks for Jocks” course actually does teach quite a bit of chemistry, physics, biology, and even a little math. At many colleges, the class doesn’t turn out to be quite as easy as the jocks were hoping.  And you know what? Many people who take the course, even some of the jocks, end up majoring in geology. Probably because it’s fun to go hiking and look at rocks and play with minerals. Really, really fun, even if there’s a little chemistry and math and such thrown in. So perhaps “Rocks for Jocks” serves as good recruitment for the sciences, or at least for geology.