On September 13, 2020, I was eager to jump in and participate in another virtual Wikipedia Edit-a-Thon to create/edit pages for women and non-binary people in STEM. After completing the 500 Women Scientists Wiki Scholars program earlier this summer (see blog post), I’ve been looking for more opportunities to improve representation in this global source used by all audiences. The Edit-a-Thon on September 13th was in conjunction with the 500 Women Scientists Picture A Scientist weekend, featuring a screening of the documentary Picture A Scientist and panel on Harassment in STEM (recording online, panel included Billy Williams, Senior Vice President of Ethics, Diversity & Inclusion at AGU). For the Edit-a-Thon, 22 editors came together to create 3 new wiki bio pages and update 54 existing pages – great work for a 3-hour session!

Snapshot of the dashboard for the Picture a Scientist Wikipedia Edit-a-Thon, taken Sept. 23, 2020 When the Edit-a-Thon kicked off, I didn’t know which page I was going to edit. I was thinking I wanted to work on an existing page of a Black female oceanographer. My searching led me to the Wikipedia page of June Bacon-Bercey, and after reading the existing information on the page, I knew this was the biography I would spend my time adding to. Her page was created in March 2007 and has recorded ~280 page views. I hope more people visit Wikipedia to learn about Bacon-Bercey – the first Black woman to be conferred a meteorology degree, the first Black woman to give weather reports on television as a trained meteorologist, and her numerous contributions to NOAA and the Sperry Rand Corporation. I was fascinated by her work with the Atomic Energy Commission, studying the effects of hydrogen and atomic bombs on Earth’s atmosphere. And the story of how she became an on-air meteorologist – wow, I never would have expected that to be the reason (detailed on her Wikipedia page – check it out!). When she retired from government work, she earned her teaching credentials to become a substitute teacher for K-12 math and science classrooms, a service she continued into her 80’s. 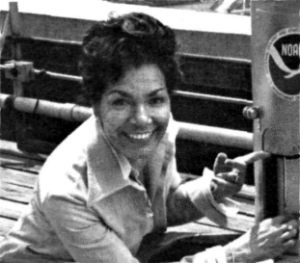 Her passion for promoting the careers of women and minorities in the atmospheric sciences was a strong part of her identity and life’s work. With her contest winnings from a television quiz show (another great story on her Wikipedia page), she worked with AGU in establishing the June Bacon-Bercey Scholarship in Atmospheric Sciences for Women. From 1978-1990, 13 female students received $400-$500 of scholarship money. There is an excellent EOS article that includes an interview with the first scholarship winner, Anthea J. Coster.

June Bacon-Bercey passed away in 2019. Her final wish was to have this scholarship re-established. And her wish is coming true, with one $1,000 scholarship to be awarded annually by AGU, beginning in 2021. Inspired by all that I learned, I not only contributed to her Wikipedia page, I contributed to her scholarship fund. We need more June Bacon-Bercey’s with her same heart and passion for investing time and energy into increasing participation in atmospheric sciences and STEM overall.