Research To Action – The Science of Drawdown Conference

The Global Climate Strike has passed, the UN Youth Climate Summit has concluded, and Climate Week NYC is underway (Sept. 23-29, 2019). Several events took place and resources were newly/recently released that you may have missed. I’ll be calling attention to some of these in a week of blog posts dedicated to climate conversations (see #climateconversations2019). I had the opportunity to attend the first international conference for Research to Action: The Science of Drawdown. Held at Penn State University (Sept. 16-18, 2019), the conference welcomed over 400 scientists, students, leaders in non-profits, medical doctors, faith leaders, psychologists… the list goes on as to the varied backgrounds of those that gathered for critical conversations around “drawdown”, the point at which concentrations of greenhouse gases in the atmosphere begin to steadily decline, ultimately reversing global warming. Although photos and video recordings of the livestream can be found online, as well as links to the research posters, there are a few points I’d like to share from my observations and experience. These highlights won’t be new to many that read this blog, but instead serve as a reminder of what we’re facing and what we need to do. 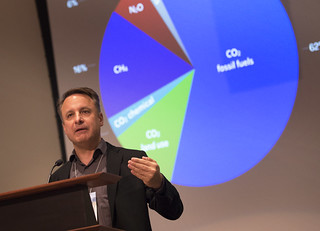 These points are presented in a bulleted format, for these were snapshots from the overall conversations. The recorded video livestreams are absolutely the best way to capture the full picture from this conference, starting with the opening comments/keynote from President Eric Barron (The Pennsylvania State Unviersity), Dr. Jonathan Foley (Executive Director, Project Drawdown), and Dr. Tom Richard (Director, Institutes of Energy and the Environment, Penn State University).

President Barron also shared a quote from President John F. Kennedy – he wanted us to hear the full quote from one of JFK’s statements when the United States was going to the Moon, and think about the connections to what we are facing now with global warming (in other words, replace “going to the Moon” with “tackling climate change”):

We choose to go to the moon. We choose to go to the moon in this decade and do the other things, not because they are easy, but because they are hard, because that goal will serve to organize and measure the best of our energies and skills, because that challenge is one that we are willing to accept, one we are unwilling to postpone, and one which we intend to win, and the others, too. — Address at Rice University on the Nation’s Space Effort, September 12, 1962, John F. Kennedy Presidential Library and Museum 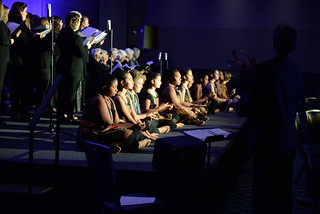 From the performance of The World I Want To See, from Flickr

One really unique part of this conference was that there were two tracks to submit abstracts – the research track, and the artist track. There was a nice collection of artistic pieces that reflected drawdown solutions. I even presented my quilt on the Drawdown sectors (the first time I’ve ever been listed in a conference program under “fine arts”!). The most powerful piece was a multigenerational performce of the science of drawdown through music, dance, and storytelling – if you want to be inspired, click on and view The World I Want To See.

For those interested in learning more on what schools and communities can do about climate change, you may want to register for the free online viewing option of the Drawdown Learn Conference, hosted by the Omega Institute, October 18-20, 2019.

I’ll end this blog post with some of the comments by Dr. Justin Schwartz, Dean of the College of Engineering at Penn State University, as his comments really resonated with me and all that I do with students, in his lunchtime keynote titled Inspiring Change, Impacting Tomorrow: Empowering the Next Generation to Save Our Species:

Research To Action – The Science of Drawdown Conference