For the month of March, in honor of Women’s History Month, I am dedicating my weekly blog posts to the outstanding organizations, resources, and inspiring stories about women in STEM. You can view my posts from last year and this year by searching on the tag “Women’s History Month”.

More and more, art is being utilized as a science communication tool. Museums have used paintings, sculpture, and even crocheted yarn that mathematically resembles a coral reef to engage non-scientists as well as scientists in STEM. For example, in 2014, The Chemical Heritage Foundation had an exhibit titled “Sensing Change” that showcased the environment in ways which we typically don’t view our own surroundings. Below are three examples of women that are successful in bridging the science and communications disciplines with their own artistic twist.

I’ve been wanting to blog about Jill for some time and to call attention to her innovative ways of bringing data to life with her drawings. Turns out everyone else wants to share Jill’s work with the world, too, as seen in recently published articles about her on the websites of Smithsonian Magazine, Climate Central, and Science Friday. Jill just finished her undergraduate degree with a double major in Earth Science and Studio Art, and she will be starting a Masters program at University of Maine in the fall. I can’t wait to see her career progress even further and where her creative vision will take our data and discipline. But don’t just take my word for it – view Jill’s #sciart at: http://www.jillpelto.com/gallery/.

I’ve been a fan of Perrin Ireland for some time, a Senior Science Communications Specialist with the Natural Resources Defense Council (NRDC).  I blogged about Perrin in the past on my post about Science Doodling, and I had the opportunity to witness Perrin in action as a science scribe at some sessions at ScienceOnline Climate and ScienceOnline 2014, and her talent at capturing highlights during conference talks is incredible.  An example of one of her creations is below. 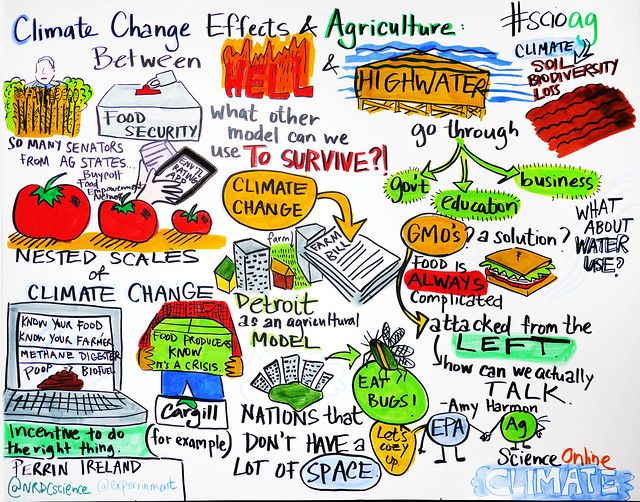 If you would like to view an entire set of “meeting notes” taken the “Perrin-way,” check out her Live scribe of a public Science Advisory Board meeting to review the Environmental Protection Agency’s report, “Connectivity of Streams and Wetlands to Downstream Waters: A Review and Synthesis of the Scientific Evidence.”

Perrin also published a video in 2014 with this description: “The space between scientific papers and newspaper headlines is a hinterland where scientists aren’t very happy, that we usually leave blank. Why is that, and what can we do? Perrin Ireland, Science Communications Specialist at the Natural Resources Defense Council, sits down with Gavin Schmidt, PhD, climate modeler at NASA Goddard Institute for Space Studies in New York, to talk about why scientists should bother advocating.” (You can watch an additional video from April 2015, five years after the Deepwater Horizon spill, where Perrin animates the impact on the Gulf with Where Did the Oil Go?)

If you are looking for more inspiration, view Perrin’s #sciart in flickr at: https://www.flickr.com/photos/experrinment/.

What happens when two undergraduate research students from California meet up in Germany? The STEM Chicks are born! Jessica Karch and Maxine Nelson have paired their passion for communicating science through articles and images and are sharing their creative accomplishments online at their site, http://thestemchicks.com/. Their mission: “to explain the science behind the familiar, like that which we find in the kitchen, and the not-so-familiar, like new technologies in energy, and to do so more rigorously than the typical popular science blog.. to clarify misconceptions and stimulate scientific interest” (from About The STEM Chicks). Their posts and graphics make science accessible to a wide audience, including the general public and pre-college students. In addition to the tweet below (from their post “Hydraulic Fracturing: What the Frack is that?“), you may want to explore their descriptions and images on topics such as “Is it getting warm in here? The Greenhouse Effect” and “Graphene.”

There are many more women that bring their creative and artistic skill sets to communicating science. I encourage everyone to follow these examples and others that are using their knowledge and talents to share science.