Himan Glacier in 1958 USGS map and in 2022 Sentinel 2 False Color image. The three ice masses with an area greater than 0.01 km² are indicated.

Hinman Glacier had descended the northwest flank of Mount Hinman in the North Cascades, Washington and based on 1958 aerial photographs, Hinman Glacier the USGS had listed this as the largest glacier in the North Cascades south of Glacier Peak with an area of 1.3 km² (Post el al 1971). In 2022 the glacier is gone with the largest relict fragment of ice at 0.04 km². This is the story of this glaciers demise that as documented by the North Cascade Glacier Climate Project, that for 40 years has observed in the field the response of glaciers to climate change. In the 1960’s the glacier extended from the ridge top of Mount Hinman at 2250 m to the bottom of the valley at 1675 m. In 1988, Hinman Glacier from the west was  a group of four separated ice masses that we surveyed. The amount of blue exposed that year indicates the glacier lacked a consistent accumumulation zone. This is indicative of a glacier that cannot survive (Pelto, 2010).  In 1992 we mapped the largest of these remaining ice masses at 0.12 km², this was another year with only pockets of blue ice left. In 1998 the glacier has a few areas of blue ice are seen, the glacier was 20% of its mapped size 0.25 km².

In 2005 we observed how thin the ice was including being able to see rock at the bottom of several crevasses  (see below). In 2006, from a Google Earth image,at this point the glacier is no longer detectable under the snowcover that persisted that summer, note the map outline and the gorgeous new “Hinman” Lake  The new lake is 1 km long. A 2009 view from the far end, north end of Lake Hinman up the valley and mountain side that was covered by the Hinman Glacier, now 90% gone. Each of the two larger ice masses from 1998 is now divided into at least two smaller portions. By 2022 the ice fragments have further diminished with the largest just 0.04 km2, less than 4% of its 1958 size. The tendency of this former glacier to be bare of snowcover by late August in many years, is what led to the rapid loss. This same story is playing out on Foss Glacier on the other side of the ridge, though not as quickly. Glacier runoff on Hinman Glacier heading the Skykomish River. Streams like this used to drain across the glacier all summer long. Now they no longer exist to feed the Skykomish in late summer.

In 2022 a cool start to summer allowed snowpack to persist in the basin into August. Runoff was strong from Columbia Glacier on Aug.1 as we forded the outlet stream, see below. By September glaciers represented the main area of melt. An extended warm period extending into October led to persistent low flow conditions, below 495 cfs (14 m³/sec), from Sept 9.-Oct. 20. 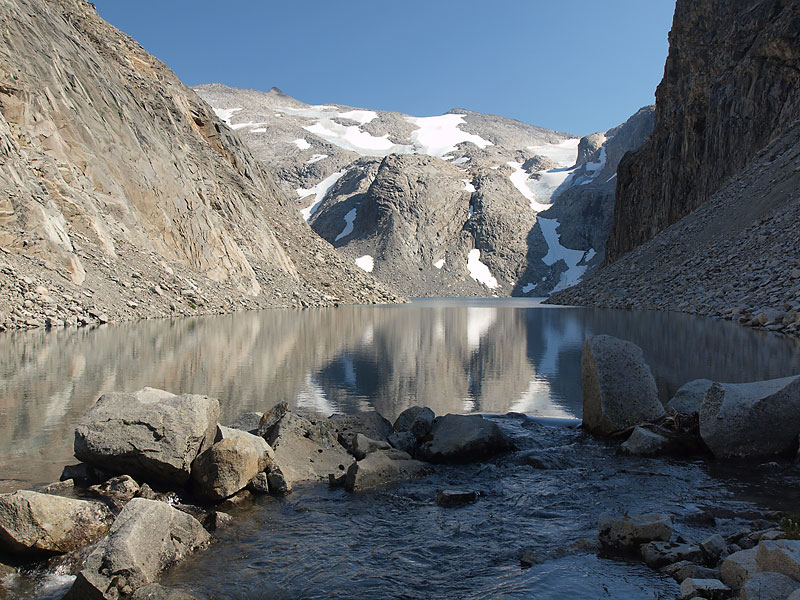 The former Himan Glacier from the new”Hinman” Lake that has formed since 1958 with glacier retreat, 3 small ice patches remain in this 2009 view. Streamflow and temperature in the Skykomish River at the USGS site at Gold Bar. Period of low flow begins after flow drops below ~500 CFS. Fording headwaters of North Fork Skykomish, which is the runoff from Columbia Glacier, on 8-1-2022.