The second largest glacier of the Juneau Icefield is the Llewellyn Glacier which is in British Columbia. The Juneau Icefield Research Program has a research camp, C-26 on this glacier and it is the typical exit route from the icefield at the end of the field season.  Here we examine changes in the terminus from 1984-2016 as a result of higher snowlines indicative of an expanded ablation zone and negative mass balance.

I first visited the glacier in 1981 and I was also on the icefield in 1984 when the Landsat image was acquired that is used as the start point for comparison. In 1984 the glacier had several termini ending in proglacial lakes A-D. We exited the glacier on the west side of proglacial lake A in 1984 onto a proglacial outwash plain referred to as the ball bearing highway.   At Point B the terminus ended in a deeper wider proglacial lake than Lake A. At Point C and D the glacier ended in a series of small lakes.  Point E is the peninsula separating proglacial lake A and B in 1984. Proglacial Lake B had a surface water level 10-15 m higher than Lake A in 1984. In 2011 the glacier still reached Point E  separating the two lakes, which still had different water levels. In 2013 the gap first opened between the two lakes, and the water level fell in Lake B. In the summer of 2016 and spring of 2017 the gap has persisted and widened to  150 m.  From 1984 to 2016 the terminus in Lake A has retreated 1300 m, the terminus at Lake B 2100 m, terminus at Point C 800 m and terminus at Point D 1100 m. The narrow tongue of ice at the pink arrow will not survive long. The crevasse pattern suggests the glacier has another 1.5- 2 km to retreat before lake development will cease.

The snowline during the 1998-2013 period averaged 1900 m too high for an equilibrium balance.  In a sequence of images from 2013 illustrates the rise is snowline from  1450 m on June 21,  to 1780 m on August 1 and  1810 m on Sept. 2.   The persistently higher snowlines since 1990 have led substantial thinning, Melkonian et al. (2013) note thinning of more than 1 m per year at the terminus diminishing to little change above 1500 m from 2000-2009. This will drive continued retreat, supplemented by calving into the still growing proglacial Lake at Point A and B.  The retreat of this glacier follows that of other glaciers of the Juneau Icefield including nearby Tulsequah Glacier, noted by Pelto et al (2013) and Pelto (2016) . 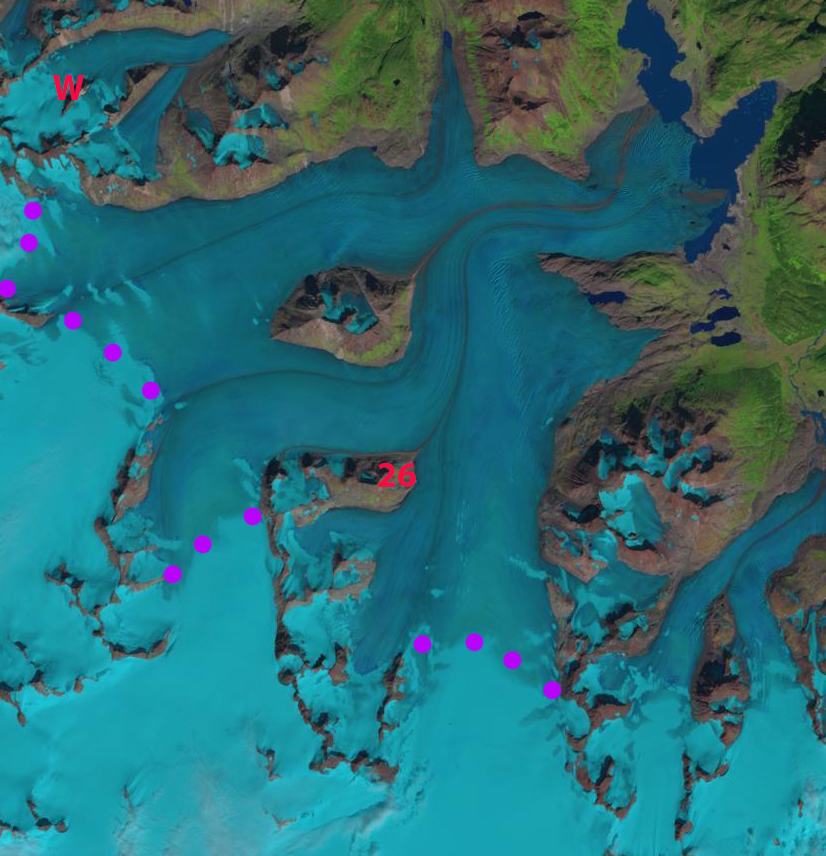