Comparison of Herbert Glacier terminus position in Landsat images from 1984 and 2016. Red arrow 1984 terminus, yellow arrow 2016 terminus and pink arrow a tributary that has separated.

Herbert Glacier drains the west side of the 4000 square kilometer Juneau Icefield in Southeast Alaska.  It is the glacier just north of the more well known Mendenhall Glacier and just south of Eagle Glacier.  It is also the first glacier I ever visited, July 3, 1981 during my first field season with the Juneau Icefield Research Program.  Here we examine the changes from the August 17, 1984 Landsat 5 image to a Sept. 1, 2016 Landsat 8 image.

The glacier descended out of the mountains ending on the coastal plain in 1948.  In 1984 we examined the terminus of this glacier, which was in the small proglacial lake at 150 m.  Herbert Glacier has retreated 600 m since 1984.  The width of the terminus has also declined. The pink arrow indicates a tributary that no longer feeds the main glacier.  The retreat has not been enhanced by iceberg calving as is the case at Mendenhall Glacier. The overall retreat is also less than Eagle Glacier. In the Google Earth images below from 2005 and 2013 the retreat is 200 m, the terminus has fewer crevasses in 2013 suggesting a reduced velocity and faster retreat to come. The annual equilibrium line on the glacier has averaged 1150 m from 2003-2016. By contrast in August 1984 I skied to the top of the icefall and could see the snowline was at 1000 m. This leaves the glacier with an AAR of 0.45, too low to sustain equilibrium, retreat will continue. In 2015 and 2016 the snowline rose to over 1400 m by the end of the melt season, indicating two years of large mass loss, which will drive further retreat. The higher snow line elevation has been observed across the icefield Pelto et al (2013). 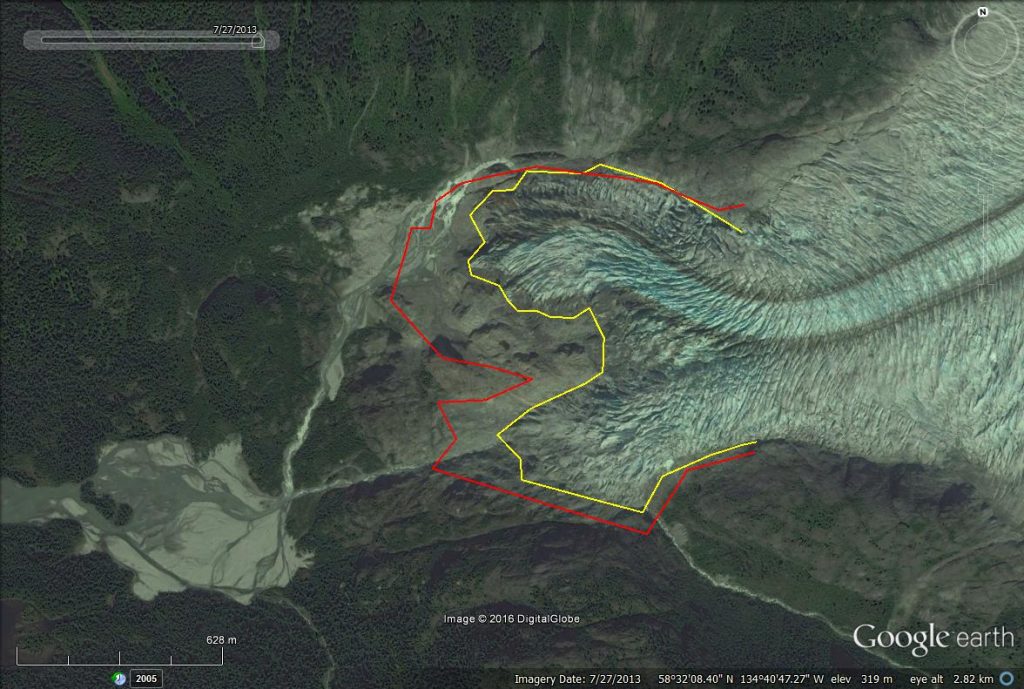